It's a Holland Hat Trick: COH Professor Gets Three Grant Notifications in One Day

Imagine a cure for diabetes—a disease that afflicts one in 10 Americans. It might not happen in our lifetime, but the work of William Holland, PhD, an associate professor in the Department of Nutrition & Integrative Physiology at University of Utah Health, is accelerating us closer. Major institutions are taking note, and Holland recently achieved a rare feat in the world of academic research: three grant award notifications in a single day. 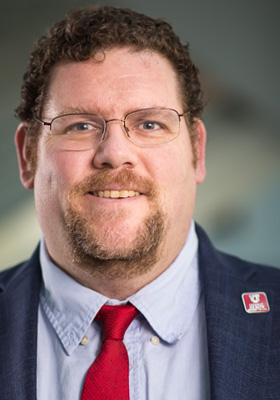 While he was an assistant professor at University of Texas Southwestern Medical Center, Holland helped find that blocking a glucagon receptor in a Type 1 diabetic animal was curative—one injection in mice was sufficient to completely cure them of diabetes. The insulin producing beta cells grew back so quickly that the mice needed no further treatment.

Moving forward, Holland is trying to determine how that occurs so it can be translated safely to treatment of diabetes in humans, avoiding troublesome side effects like liver toxicity and hypertension.

The second grant is from the American Diabetes Association for $200,000 per year for three years. It will allow Holland to continue to research how to use genetics to provide precision therapies for individuals suffering from diabetes and heart disease.

Hyperceramidemia means your blood has too many lipids called ceramides. Research into the condition involves genetic sequencing to determine which genes regulate these toxic lipids that predict diabetes and heart disease.

Today, Holland’s team measures the ceramides and genetic sequencing of patients prone to disease. They examine the genes that were identified in a mouse to see if they correlate to disease and toxic lipid levels in humans.

“One of the things you can get out of this is the ability to genotype a person to determine their risk for diabetes or heart disease in childhood,” Holland said. “If so, we can intervene to make sure that never becomes a problem—like avoiding a diet high in saturated fat.”

During this research, Holland identified what he believes is the first case of “familiar hyperceramidemia,” a family with 64% of its members receiving dialysis. This family has a mutation in adiponectin, meaning they have a lesion in the gene that causes a high level of ceramide in their bloodstream.

Holland’s team continues to determine if this genetic lesion results in high risk for diabetic kidney disease. The study of these rare genetic instances can help determine the drugs that might be useful for an entire class of people prone to diabetes.

Small Steps Toward a Big Cure

Islets are clusters of insulin-producing beta cells. When transplanted, they can release insulin to control blood glucose. SymbioCellTech is a biotechnology company based in Utah that is working to cure diabetes through a patented stem-cell therapy involving neo-islets.

Perhaps most impressively, Holland is the principal investigator on all three of the grants that received over $2.7 million in total funding. He earned a PhD in biochemistry from the University of Utah and completed his degree research with Scott Summers, PhD, the current chair of the Department of Nutrition & Integrative Physiology. Like Summers, Holland is motivated to cure diabetes due to a history of the disease in his family: his mother and grandfather both suffered severe complications.