Proud of U: Shane Brooks

In one of the largest colleges at the University, there are many accomplished students, but it’s tough to compete with Shane Brooks’ track record. He won this year’s outstanding undergraduate award at convocation because he’s truly gone above and beyond at the College of Health—and overcome substantial difficulties along the way. 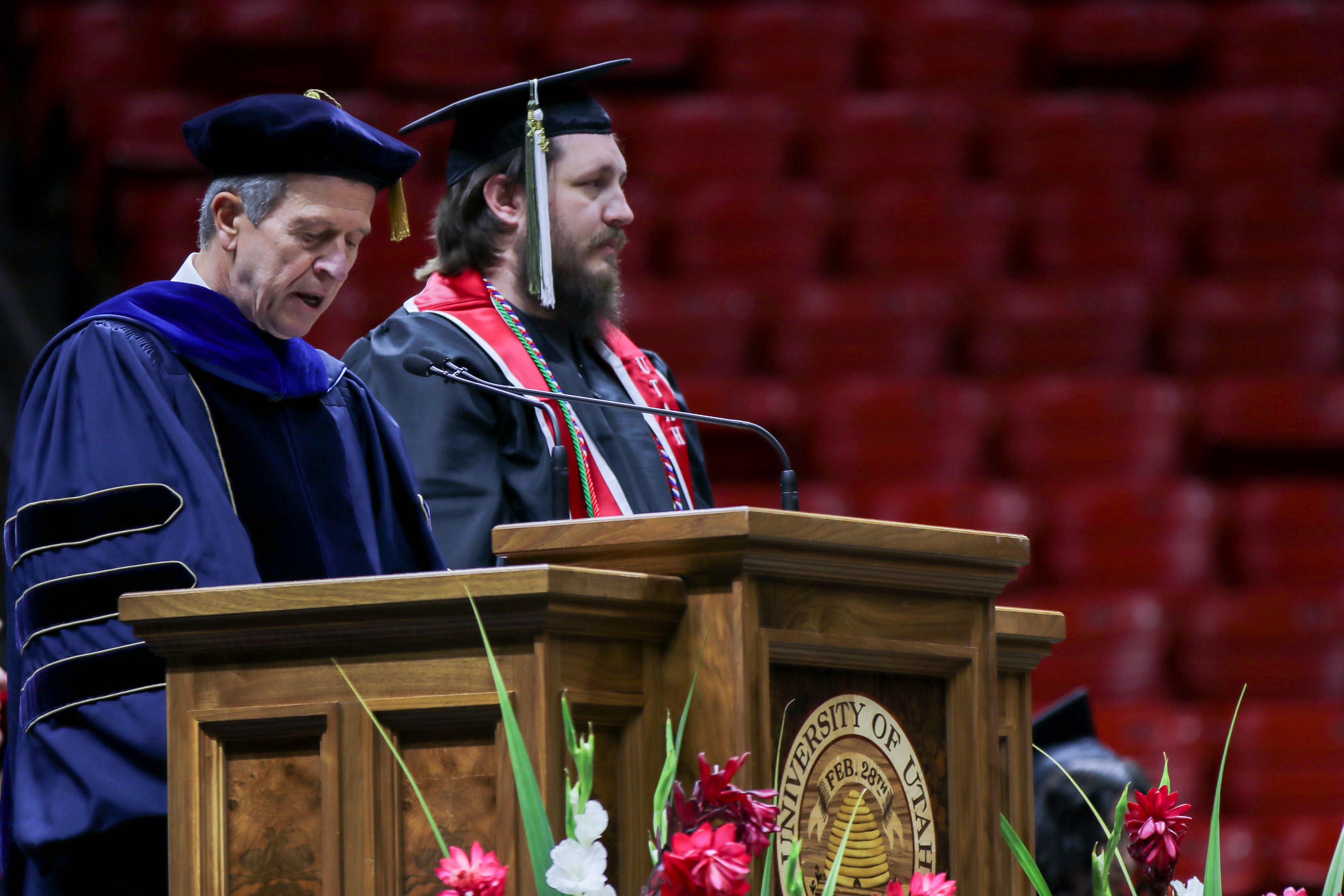 A Wyoming native, Brooks is a successful graduate of the College’s recreational therapy undergraduate program and plans to pursue a master’s degree, followed by a Ph.D. in clinical psychology. He’s also an impactful lobbyist in the Utah legislature, runs his own nonprofit and he’s a Marines Corps veteran. But for a while, his story didn’t seem so promising.

“When I was 13, I became an alcoholic and drugs followed shortly after that,” he said. “For most of my life I’ve been battling addiction. My addiction really took off after a Marines deployment to Afghanistan and the resulting PTSD. I went haywire with alcohol, cocaine and opioids.”

After several overdoses and suicide attempts, Brooks was near rock bottom. He unsuccessfully attempted to get clean five times, before finding a program at the VA in Salt Lake City. He worked closely with a recreational therapist, who showed Brooks that he could “heal and get healthy while I was having fun.”

Thanks to that experience, Brooks felt moved to begin a nonprofit for the underserved and pursue a degree of his own in recreational therapy.

Rising Up and Giving Back

“I decided I was going to start a nonprofit that was eventually going to have a completely free mental health and substance treatment facility,” he said. “It’s called The Inclusion Initiative and we work with cognitive impairments, racial exclusion, physical disabilities, you name it—if people feel excluded for anything we work on it. We currently focus a lot on homeless outreach and the prison demographics.”

Long-term, Brooks hopes to work full-time for the nonprofit, but he’s currently running it with a friend while managing his student course load and internship. That includes deliveries all around the valley for families experiencing financial hardships.

“There are some nights I’ve been doing homework and then driving care packages until 3 a.m.,” he said. “Then I’m back at school by 8 a.m.”

And that’s not Brooks’ only major time commitment. He’s also an active lobbyist in the state legislature and has helped pass 37 bills in the last two years. He was very involved in passing H.B. 282, which allows citizens in a mental health crisis to voluntarily surrender guns to law enforcement officials. The surrender is temporary and does not put citizens on a do not purchase registry.

Brooks also worked to help pass a bill that changed police justification of deadly force on individuals experiencing a mental health crisis. The new law requires officers to refrain from force if the individual is not a threat to an officer or a third party.

“I don’t think I’ll do a career in politics but continue to make changes behind the scenes,” he said. “I prefer the seat I have because I can be bipartisan. If a bill I’m proposing needs to go one way or another, I can pull people in, and I’m allowed that flexibility. It helps me make sure both parties are working together.”

Despite his time constraints, Brooks was far from an average student. His experience in the Marine Corps pushed him to excel in his schoolwork and serve as a leader among his peers in the classroom. He received both the College’s outstanding undergraduate award and the Department of Occupational and Recreational Therapy’s outstanding student of the year award. He received the latter award at the Utah Recreational Therapy Association’s annual conference, where he presented his research.

“Every recreational therapy professor made each class their own and they were able to provide, unique, fun, therapeutic interventions that I could use in my career,” he said. “At the same time, they all were effective in helping me in my personal life. When I was struggling with PTSD, they were there, and that was amazing.”

Recreational therapy has changed Shane Brooks’ life, and he’s already using the knowledge from his education to pay it forward. The work may seem lighthearted, but the results are seriously transformative.

“Once you learn what recreational therapy is, you realize you’ve been doing it on your own your entire life,” he said. “When you get stressed, angry or sad, you go to your hobby that comforts you—then you’re doing recreational therapy. It’s a career where you get to have fun every day and watch people’s lives change.”

“Shane is a Marine Corps veteran who has brought a unique personal experience to his program, having been a recipient of recreational therapy services himself. He is very involved in legislative efforts, serving as a lobbyist actively advocating for bipartisan support for mental health, social and racial justice, juvenile justice, healthcare, suicide prevention, and veterans and recreational therapy issues. Shane was engaged in research with the RT faculty and presented his work at the Utah Recreational Therapy Association’s annual conference.”