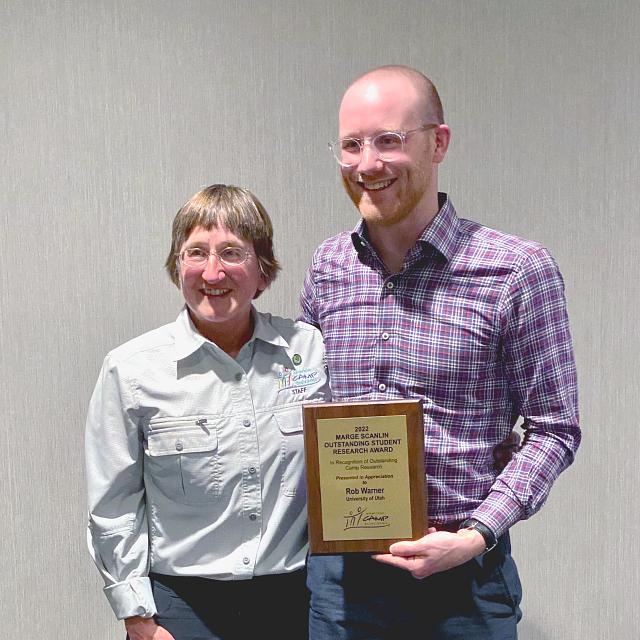 Rob Warner, a Ph.D. student in the Parks, Recreation, and Tourism department, has received a prestigious national award from the American Camp Association. The award recognizes his paper, “Comparing the Developmental Qualities of Camp to Other Summertime Settings.”

Warner studies the role of out-of-school time in adolescent and emerging adult development. He collaborates with the Sibthorp Lab, led by faculty member Jim Sibthorp, Ph.D. His research interest focuses on how the impact of the out-of-school context on development varies based on the unique characteristics of experiences, settings and individuals.

“I was quite surprised and humbled to receive this award,” Warner said. “Countless fantastic researchers have received the award before me, so it really meant a lot to join the group.”

Warner presented his research at the ACA National Conference in February. He becomes the seventh student from the University of Utah to receive the award since it was established in 2008.

“The American Camp Association has been a great supporter of our department and students over the years, and we are very pleased that Rob has joined the ranks of University of Utah students who have received the Marge Scanlin award,” said Dorothy Schmalz, Ph.D., interim chair of the parks, recreation, and tourism department. “He’s an exceptional thinker and researcher; this honor is well deserved.”

The Marge Scanlin Outstanding Research Award is based on the quality of research and the contribution the project has made to the camp movement. Marge Scanlin was a driving force behind many of the research efforts of ACA. Upon her retirement, this award was established as an ongoing tribute to recognize her contributions by supporting emerging scholars interested in research related to camp.