By Bill Keshlear / College of Health 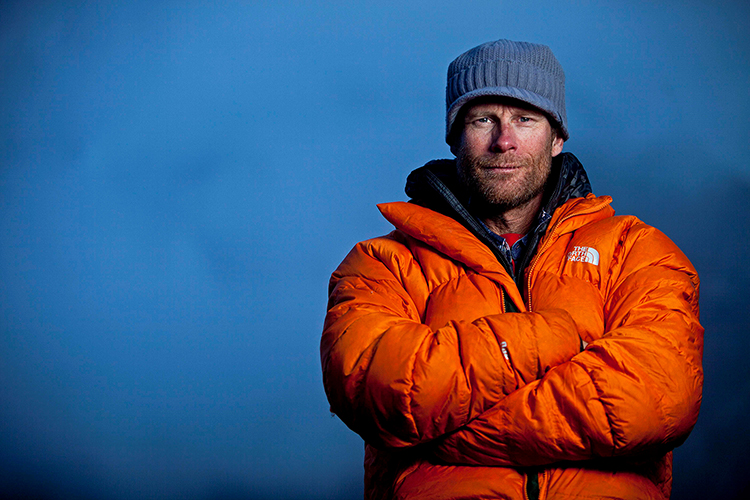 Veteran climber Conrad Anker, a 1988 graduate of what is now the Parks, Recreation and Tourism program at the University of Utah, breaks the news to his search companions using a code they devised to prevent other climbing expeditions then on Mount Everest from hearing the news and communicating it to the outside world.

“I’ve got a Thermos of Tang juice and some Snicker bars,” says Anker, according to transcripts of radio transmissions between the climbers. “Why don’t you guys come down and have a little picnic with me? Over. ...”

The word “Snicker” triggers a response.

“I’m standing by here. Just a quickie,” says Eric Simonson, the expedition’s leader who was monitoring a team of British and American climbers on an archeological expedition scour a barren, wind-swept slope at 27,000 feet. Communication is secretive.

“I want you guys to know that there is at least one other expedition on our frequency ... right now.”

Kelli Rhoads of Pocatello, Idaho, climbing the Nepal side of the mountain as part of another expedition, overhears their excited chatter. She knows the expedition is investigating one of climbing’s enduring mysteries, the disappearance of George Mallory and Andrew Irvine high on Everest’s North Face in 1924. Did the British climbers scale the summit before they died? Were they – and not Edmund Hillary and Tenzing Norgay, who accomplished the feat some 30 years later – the first to the top of the world.

“We knew they had found something,” she said, recounting the story in May 2000, a year later. She was correct.

Anker found a body amid the talus. He believed it was that of Andrew Irvine. “Wait, this is George Mallory,” says another member of the expedition, Jake Norton, a 25-year- old climber from Colorado Springs, Colo., who had been summoned to help examine the body.

“Really,” says Dave Hahn. “Oh my God! Oh my God! OK, somebody tell me good and loud what we’re looking at here.”

Norton responds: “Right now we’re going through the clothes on this body’s back and we see a ... name tag. If you can’t see it, it says G. Mallory. ...”

The expedition’s find represents another set of clues in solving the riddle of who was rst person to the top of Mount Everest. That climbing season, 1999, another expedition tried – and failed – to find a Kodak Vestpocket Model B that Mallory and Irvine could have taken to doc- ument their climb. Imagine the image: Mallory or Irvine smiling, victorious atop the peak. It’s quite possible an image from that disastrous 1924 expedition could be preserved by ice and snow somewhere on the flanks of the mountain.

It is still not known whether Mallory and Irvine could have climbed the Second Step, a 100-foot rock outcrop that even by today’s standards would be a difficult climb without the aid of fixed ropes, anchors, or a ladder, all of which are used by climbers today.

Anker attempted an unassisted climb of the Second Step on May 17 during his summit bid, a feat Mallory and Irvine would probably have had to perform to reach the summit. It only took him a matter of minutes. Anker demonstrated that the crux could have been climbed by the two British climbers; the technical dif culty of the Second Step would have been at the upper limits of Mallory’s capability.

But there is a big difference in the climbing and physical abilities of Conrad Anker and George Mallory. Anker is one of most technically proficient rock climbers in the world.

In contrast, Mallory’s equipment and clothing – by today’s mountaineering standards – were more suited to a walk in the park than an assault on the world’s highest mountain. Still, Mallory had a singular obsession with standing atop

Everest. And he had been denied on several other occasions.

“I can’t see myself coming down defeated,” Mallory was quoted as saying. On June 6, 1924, Mallory and Irvine were spotted “going strong for top” by another expedition member at about 12:50 p.m. Noel Ewart Odell’s initial description of the climbers’ location matches a spot above the most difficult parts of the nal climb.

They could’ve been “going strong,” with enough day- light to reach the summit, but not enough daylight to guide them down safely.

In the darkness, a misstep or stumble could’ve led to a profound fall, a slip “into a darkness for which there will be no dawn,” writes William Nothdurft in the report led by 1999 expedition, “Ghosts of Everest: The Search for Mallory and Irvine.”

Conrad Anker, who will deliver the 2017 commencement address May 4, 2017, is a climber’s climber. He’s at home on a faraway alpine wall or the sparkling ice of his home canyon, Hyalite, located in the Gallatin Range of southwestern Montana.

Anker began climbing at a young age, developing a deep appreciation for the outdoors from his California childhood – an appreciation and respect that has deepened as climbing took him around the world. He jokes that he chose the U because a university promotional brochure showed mountains in the background.

“Conrad Anker, like so many of our students, was attracted to the natural beauty of this state,” said U President David W. Pershing. “We are grateful he chose the University of Utah, and we are proud of him as an alumnus. His extraordinary achievements and strength of character are inspiring.”

The reality of the school’s close proximity to granite ascents and red rock spires allowed Anker to hone climbing skills while earning a degree.

He worked for the school’s campus recreation program and took enough business courses to start his own a company while in school. He eventually sold the startup that is now known as KÜHL for $10,000.

Over decades in the mountains, he has come to value the rarified air of Antarctica, the Himalaya and Montana equally; inspired by the value of immersion in other ecosystems and cultures, he’s become more fully enmeshed in both the physical and communal landscape of his hometown of Bozeman.

In May 2012, Anker summited Everest for the third time, leading an educational and research-based expedition to the Southeast Ridge with The North Face, National Geographic, The Mayo Clinic and Montana State University. That summit came without supplemental oxygen, a distinction claimed only by the world’s top climbers.

Although he’s been feted and recognized internationally – along with partners Jimmy Chin and Renan Ozturk – in the 2015 Sundance film “Meru” for a 2011 ascent of the Shark’s Fin on 20,700-foot Mount Meru in northern India, Anker took equal pleasure in his recent summit of Denali with his oldest son, Max.

Mindful and appreciative of the beauty and grandeur of both places, he remains grounded by and connected with the partners who give such trips the full measure of value. The Shark’s Fin, an iconic spire that repelled some of the world’s best alpinists for decades, ful lled the dream of Anker’s mentor, Mugs Stump, whose life convinced Anker that life in the mountains was a life worthwhile. When the trio reached the final pitch, Chin urged Conrad to lead. He demurred, offering the honor to Jimmy. “The Shark’s Fin had been Mugs’ dream and then, for a while, mine,” Anker wrote in Alpinist Magazine. “... It was already time to pass on that metaphysical ball of knowledge to someone younger.”

“Conrad understands the power and majesty of nature and climbs to better understand both human potential and human limits,” said Daniel Dustin, professor in the Parks, Recreation and Tourism program. “His sensibilities, interests and commitments extend far beyond mountain climbing.”

As captain of the The North Face Athlete Team, Anker has something of a pulpit, and he’s quick to use it, urging, for instance, climbers to be boots on the ground in observing the changes wrought by human-caused climate change.

He’s also civically active at home, serving on the boards of the Montana State University Leadership Institute, Pro- tect Our Winters, Bozeman Ice Tower Foundation and Gall- atin County (Montana) Fair Board. He does philanthropic work in Nepal and climbs with PTSD-affected veterans in Montana.

In 1999, the year he discovered the body of Mallory, Anker lost his friend and climbing partner Alex Lowe in an avalanche in Tibet. Lowe left behind a wife and three children. Eventually Anker married Lowe’s widow, Jenni Lowe-Anker, and adopted the three boys. The two established the Alex Lowe Charitable Foundation – a Montana based non-profit that funds the Khumbu Climbing Center in Phortse, Nepal – to provide “direction and financial support to sustainable, community-based humanitarian programs designed to help the people who live in remote regions of the world,” according to the Alex Lowe Charitable Foundation’s website.

“I’ve learned that these things – my family, my passion for climbing and for being a force for good in the local community and in the larger community – are the source of happiness for me,” Anker says. “I know that life will keep changing and keep throwing new challenges my way, but my intent is always to embrace them and explore them and nd a way to turn them into an experience that’s rewarding. Even when we’re suffering, whether it’s in the mountains or because of something going on at home, trying situations are a way to understand our human condition. You have to try to rise above the adversity. I like doing that.”